In all, six teams from across Eglin and Hurlburt competed to see who could build the fastest reef sections, including staff from Corvias, the Rapid Engineer Heavy Operational Repair Squadron Engineers, the Hurlburt Honor Guard, Jackson Guard, the Bioenvironmental Engineering Flight, 73rd Special Operations Squadron, the 11th Special Operations Intelligence Squadron, and the 1st Special Operations Aircraft Maintenance Squadron. Corvias donated the most volunteer hours to build 18 reef sections (450 linear feet), in addition to an $8,000 grant to fund the reef project as part of their Giving Back program.

“Our Giving Back projects are part of who we are and what we do here at Corvias,” explains Katie Fuentes, Construction Service Administrator at Corvias, “This year’s partnership with CBA was a great experience allowing our whole team to participate for a memorable team building project. We’re thankful to have organizations in Northwest Florida like CBA who are dedicated to the health of our waterways.” 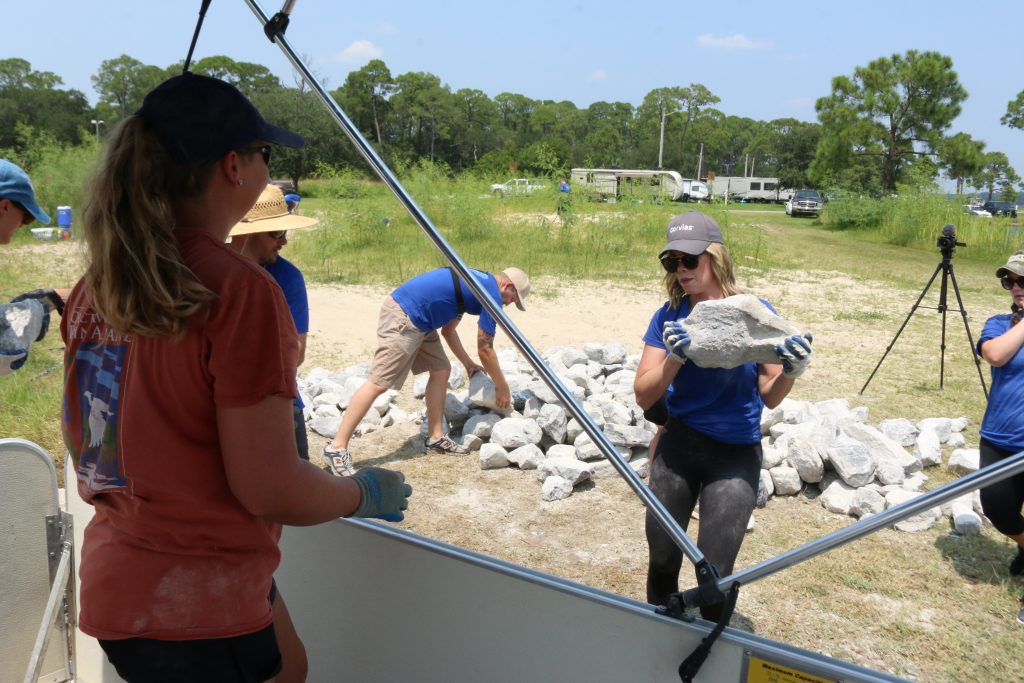 “Reef breakwaters and living shorelines protect cultural and natural resources on Eglin Air Force Base,” explains Alison McDowell, Director of the Choctawhatchee Basin Alliance, “In addition to reducing erosion, the breakwaters provide habitat for fish, oysters, and other native species.”

“We could not have finished this project in two months without the help from Eglin’s Outdoor Recreation’s staff at the Post’l Point Marina,” Rachel Gwin, CBA Restoration Coordinator adds, “They offered the use of their boat and an ATV so we could move the limestone material from the staging area to the reef itself. Huge thank you to them!” She continues: “It was a monumental task to move that much material by hand to finish the reefs in two short months, but the volunteers were amazing to work with and made this project one of my favorites to complete.”

The Choctawhatchee Basin Alliance is a non-profit organization striving to enhance swimmable, fishable waterways through monitoring, education, restoration, and research. For over 20 years, CBA has promoted water stewardship within the Choctawhatchee watershed, growing the network of supporters who join in CBA’s mission to provide a future for these precious, natural resources.

Adaptation, y'all! If you have been keeping up wit

That face you make when you needed help, but didn'

All hands on deck! CBA is issuing a call for all h

What's the rush? Welp, we rushed to pot these need

So chonky! One of our oyster gardeners sent this p

A li'l bouquet of snails! These marsh periwinkles

Fun for the whole family! This April, bring the ki

All Hands on Deck! CBA and @nwf_environmental_ste

Happy #worldwaterday! On this day, we are celebrat

Feeling grateful! Our hearts are full at CBA, thin

Woo-hoo! Stallworth Lake, one of our rare coastal

Beginning to see the light! Here's a little ray of

#mondaymotivation Time to get to step out on that

CBA is so excited to take part in the Grand Openin