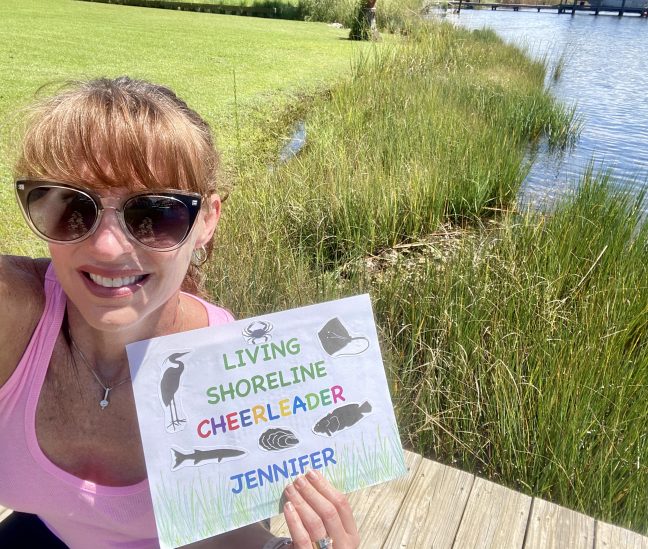 In 2016, Jennifer McPeak partnered with CBA to construct a living shoreline along her property. She was so excited about the process and results that she has become an enthusiastic spokesperson for this green infrastructure technique. After seeing Jennifer eloquently speak about her living shoreline in a PBS video report, the National Wildlife Federation (NWF) reached out to Jennifer to collaborate on a project focusing on private property owners who had implemented living shorelines. Jennifer gladly agreed to talk to them, and not long after NWF invited Jennifer to Washington D.C. to meet with them and speak to representatives from different congressional offices about her firsthand experience with living shorelines. McPeak said, “After engaging the CBA to install oyster reef breakwaters and a living shoreline on our property and seeing how effective they are, I became an enthusiastic evangelist for them.  Not only do they stop – and in some cases, reverse – erosion, but they provide habitat for a fascinating number of native animal species.  So when the National Wildlife Federation reached out and invited me to speak with congressional representatives about the value of living shorelines, I could not have been more thrilled and excited to do so.  It was wonderful to see how receptive they were to the idea of using natural infrastructure solutions to address property safety, climate change concerns, and wildlife habitat needs.  I hope to see more private homeowners and public project managers choose living shorelines over traditional seawalls in the near future.”

While on the short visit, Jennifer met with aides from three different senators’ offices and discussed the proven benefits of living shorelines, and also addressed some of the frustrating obstacles to getting a permit to build one on your property. Jennifer reports that many of the aides were familiar with living shorelines, but were amazed by the fact that saltmarsh grasses were so efficient at filtering out excess nutrients from the water. Also, all were surprised to hear about some of the permitting obstacles and the fact that it is so much easier to get a permit for a seawall than it is to get one for a living shoreline. NWF staff also interviewed Jennifer and featured her in the article debuting their publication on the status of living shorelines along the Gulf and Atlantic Coasts. You can view the NWF article here, and the Softening Our Shores publication here.

We are so thankful for our waterway heroes that strive to preserve and improve our watershed! Jennifer has gone above and beyond in her support of living shorelines and CBA, guest speaking on a Climate Central article, PBS video, and now with NWF on these publications. We are also thankful that living shoreline projects are becoming more recognized and celebrated, and hope that permitting these projects will continue to become more streamlined in the future.

A big CBA "thank you" to Mid-Bay Bridge Rotary Clu

Our water quality monitoring and research team is

It's nurdle time! In partnership with Nurdle Patro

What is this, you may ask? It's a Cleanswell Beach

The CBA staff and @nwf_environmental_stewards Amer

Hey, naturalists! Check out a few of the incredibl

A great spot for adventure! This little landing on

We have officially started building the oyster ree

Hump Day help! We work hard just like you. CBA and

During seagrass monitoring, the reward for our eff

Yep! Seems about right. Here's a glimpse of our #

From all if us to all of you, our warmest holiday

Whew! What a year! Despite some challenges, CBA st

Last-minute gifts? A hard-to-shop-for loved one? A

Nature's Christmas decorations! 🍄🌲 Have you