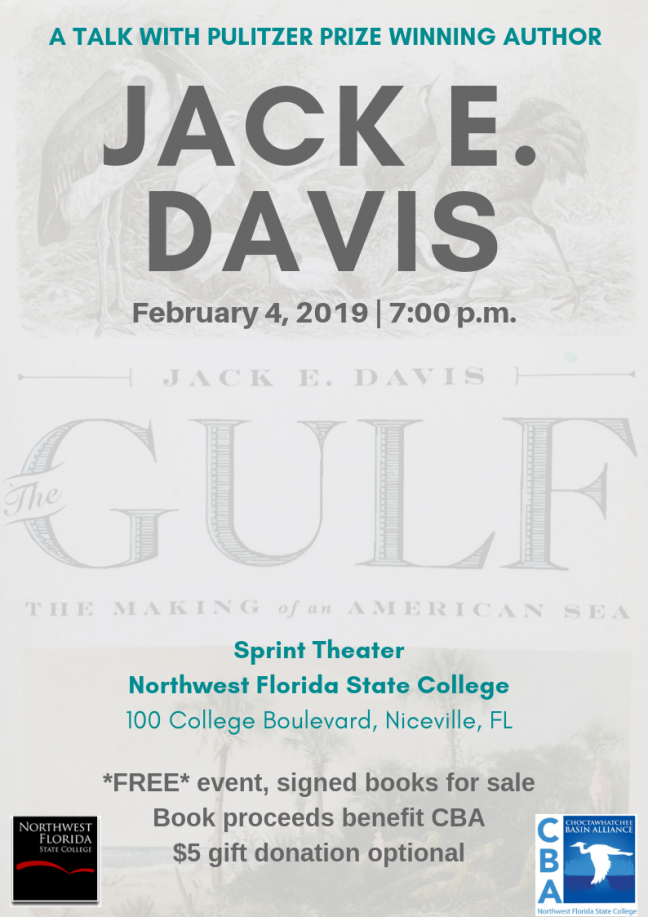 On February 4th at 7 p.m., Jack E. Davis will give a talk on his Pulitzer-prizing winning book “The Gulf.” The event will feature an introduction by Commissioner Kelly Windes and NWFSC President Dr. Stephenson, and take place at the Sprint Theater on the Northwest Florida State College in Niceville. Book proceeds and donations benefit the Choctawhatchee Basin Alliance.

Upon joining the faculty at UF, he founded the department’s student journal, Alpata: A Journal of History. His Race Against Time: Culture and Separation in Natchez Since 1930 won the Charles S. Sydnor Prize for the best book in southern history published in 2001. His next book, An Everglades Providence: Marjory Stoneman Douglas and the American Environmental Century (2009), received a gold medal from the Florida Book Awards.

The Gulf was a New York Times Notable Book for 2017 and made several other “best of” lists for the year, including those of the Washington Post, NPR, Forbes, and the Tampa Bay Times. In addition to winning the 2018 Pulitzer Prize for History, The Gulf was a finalist for the National Book Critics Circle Award for nonfiction and winner of the Kirkus Prize for nonfiction.

“The book focuses on the foundational history and ecology that has shaped our region as a whole,” says Alison McDowell, CBA Director, “As a non-profit organization dedicated to studying and improving our natural environment, we are looking forward to meeting Dr. Davis and will use the proceeds from the event in our programs to enhance swimmable, fishable waterways in our community.”

The event is made possible through a generous gift from Jennifer Boxen.

In honor of #iheartestuariesweek, here's a fun fac

Today is International Day of Women and Girls in S

Getting off to a good start! We hope you are enjo

This month in Grasses in Classes our 5th graders a

Did you know?... One adult oyster can filter up to

It's never too early to learn about living shoreli

We are sending a huge CBA 🙏 to the Medina Famil

#worldwetlandsday! Enjoy this shot of one of our b

We love this fun, local tournament! Sign up now an

Get curious! We hope we never lose our youthful cu

Where will you explore this weekend? The Choctawha

Fish in the classroom!Yesterday, our education tea

Saltmarsh symphony. Aside from the distinctive cri

CBA will see you next year, Merry Christmas and Happy Holidays!